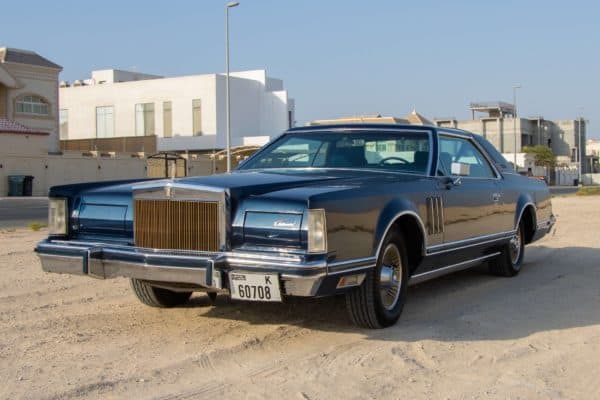 The last word in American luxury was the Continental, a massive luxury land yacht powered by a 6.6L V8 engine.

These kinds of cars are a throwback to a bygone era. An era where the main motto was bigger is better. The evidence is that massive 6.6L V8 and nearly 6-meter vehicle length. This specific Mk 5 Continental is even more special as it is a Collectors Series vehicle. A special edition of just over 6,000 units was produced, with fewer than 4,000 of those being produced in Midnight Blue Moondust Metallic. This car came equipped with power windows, power door locks, front bucket seats, power steering and cruise control as standard. Amenities that were certainly luxuries at the time.

This Continental is completely in stock condition and comes with its original paint. The vehicle was imported from the US and has remained with the same owner for several years. In short, a very well-taken-care example of the classic late-70s American luxury car.

This was a big car, and it was a luxury car in the traditional sense of the word. Massive presence, massive torque, and massive amounts of tufted pillow velour…The 1979 Lincoln Continental Town Car is unmistakably the end of the era of American Land Yachts. A style that could only have been given the green light for production in that short era. Today, its massive size is a novelty. – Evan Williams, Autotrader.ca

As detailed in the Inspection Report, minor leaks were found at the engine oil sump and the exhaust at the muffler. Also noted were the minor remarks for the brake fluid and fuel filter, which may need replacement in the future.

The car was recently serviced on October 25, 2022, which included replacing the engine oil, new drive belts, new fan wiring and an AC gas top-up. It also comes with four new Nexen tires (235/70 R15), which were fitted earlier in February 2022.

It is worth noting that regular maintenance and replacement of numerous wear and tear parts have been undertaken over the many years of ownership. All maintenance records from 2017 to Oct 2022 can be found in the History Report.